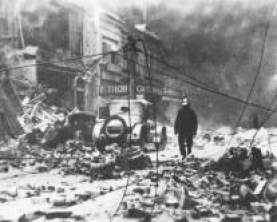 Following a massive earthquake (7.9 on the Richter scale) on the morning of Tuesday 3 February 1931, fires destroyed most of the commercial heart of Napier. The city was rebuilt in the style of that era and by the end of the decade Napier was the newest city on the globe.

Nowhere else can you see such a variety of buildings in the styles of the 1930s - Stripped Classical, Spanish Mission, and above all Art Deco, the style of the 20th Century. Napier's Art Deco is unique, with Maori motifs and the buildings of Louis Hay, admirer of the great Frank Lloyd Wright.

Napier is enhanced by palms and the angular Norfolk Island pines and bounded by fertile fruit and grape growing plains, dramatic hills and the shores of the South Pacific. In Napier, you can enjoy the legacy of its brave rebuilding and savour the spirit of the optimistic Art Deco era.

The style we now call Art Deco originated in Europe in the early years of the 20th century, and its heyday was from 1920 to 1940.

It became widely known following the great Exposition des Arts Modernes Decoratifs et Industriels, held in Paris in 1925 and from which its name was ultimately derived. By the late 1930s it was in its streamlined phase and after World War 2, the International Style, devoid of all decoration, held sway. Not until the late 1960s did people begin to rediscover it and take it seriously.

Art Deco expressed all the vigor and optimism of the roaring twenties, and the idealism and escapism of the grim thirties.

Its decorative themes are:

Disclaimers and Copyright
While every endeavour has been taken by the to ensure that the information on this website is accurate and up to date, shall not be liable for any loss suffered through the use, directly or indirectly, of information on this website. Information contained has been assembled in good faith. Some of the information available in this site is from the New Zealand Public domain and supplied by relevant government agencies. cannot accept any liability for its accuracy or content. Portions of the information and material on this site, including data, pages, documents, online graphics and images are protected by copyright, unless specifically notified to the contrary. Externally sourced information or material is copyright to the respective provider.