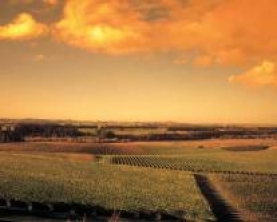 The Hawke's Bay region encompasses the area around Hawke Bay on the East Coast of the North Island. It is 332 kilometres (about four hours' drive) north-east of Wellington City.

The landscapes of Hawke's Bay begin with the high, forested Ruahine and Kaweka Ranges. From the mountains, the land steps down towards the coast, flattening out to become the Heretaunga Plains. A number of wide rivers run swiftly to meet the blue Pacific Ocean.

Hawke's Bay is loved for its sunny climate, fabulous beaches, sheltered coastal plains and long established vineyards. It is also one of the country's largest pip fruit growing areas.

The Hawke's Bay vineyards are all within a short distance of Napier and Hastings. More than 30 vineyards are open to the public for wine tasting. Many also operate cafes and restaurants in both indoor and outdoor settings. The region is especially known for its fine Chardonnay and Cabernet Sauvignon varieties.

Another unique attraction is the gannet colony on the very tip of Cape Kidnappers, believed to be one of only two mainland gannet colonies in the world. Gannets are large sea birds with long, pointed wings and golden-yellow heads.

You can also find plenty of adventure in Hawke's Bay - rafting on the Mohaka River, horse trekking, hunting, trout fishing, paragliding off Te Mata Peak, hiking, cycling or take a leisurely journey along one of the 18 heritage trails around the region.

Hawke's Bay also has what is believed to be the longest place name in the world - Taumatawhakatangihangakoauauotamateaturipukakapimaungahoronukupokaiwhenuaakitanarahu. It means 'the place where Tamatea, the man with the big knees, who slid, climbed and swallowed mountains, known as landeater, sang and played his flute to his loved one'. This name is usually shortened to Taumata.

Disclaimers and Copyright
While every endeavour has been taken by the to ensure that the information on this website is accurate and up to date, shall not be liable for any loss suffered through the use, directly or indirectly, of information on this website. Information contained has been assembled in good faith. Some of the information available in this site is from the New Zealand Public domain and supplied by relevant government agencies. cannot accept any liability for its accuracy or content. Portions of the information and material on this site, including data, pages, documents, online graphics and images are protected by copyright, unless specifically notified to the contrary. Externally sourced information or material is copyright to the respective provider.